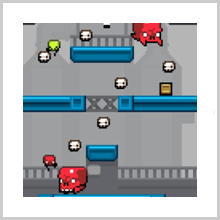 Many iPad games have been specially created for the ION Audio’s iCade, the outlying which features a physical joystick, along with buttons for the Apple tablet that are included in an arcade-like cabinet. The current list comprises of a wide range of classic arcade games, and plenty of interesting experiences, and lately, several new attractive titles have been added to provide users with a more fulfilling experience.

Nevertheless, if you already own an iCade, and you want to focus on the best games, without having to spend a lot of time digging around, here are a few of the most engaging iCade compatible options that you might want to consider.

To begin with, one of the most popular choices is Super Crate Box, which has been released again at the beginning of January, and is one of the most captivating games of the year. It costs only $1.99, it has an exciting design, and a relatively simple concept that will surely please you. During the game, players have to gather as many crates as possible, without making contact with the enemy. Also, it receives a new weapon each time it collects box snags, and you will surely have a lot of fun weaving, dodging and trying to survive, while your score goes higher and higher.

Moving on, another entertaining game is Hard Lines, which costs just $0.99, and is a newly improved version of the classic snake game. This amazing formula of the game brings in a lots of new experiences, and during standard mode, the player has to extend the snake as much as he can, while also fighting the competitors, and eating the resulting bits. It is fun, and interesting, and you will never get bored while playing it.

Furthermore, one of the finest SNK arcade games is Metal Slug 3, which was released last month and it is available for $6.99. The game presents more exciting features than it did at its debut, and the players will have to gun through various stages, fight the zombies, soldiers, and many other impressive characters. The exceptional physical controls are a huge advantage for this game and it will certainly offer players an unforgettable experience.

If you want to enjoy an excellent sound track, flawless pixel-art design, and a diverting arcade-style shooter, then you should invest $1.99 and purchase the Velocispider game. While playing you will be fighting against ingeniously made robots and all sorts of eerie creatures, and you will have a great time due to the humoristic approach of the game. It may not appear to be something out of the ordinary, but once you start playing, you will never want to stop.

Moreover, Super Mega Worm is the ideal game for those who are seeking for a terrifying gaming experience, which will keep them focused for hours. It costs only $1.99, and it features great graphics, an engaging soundtrack and impressive characters, like bloodthirsty worms, vaults through the air, even animal and vehicles that will provide your with a rewarding gaming experience.